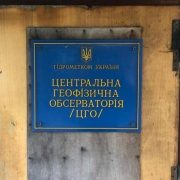 After ionizing radiation sources were found at Central Geophysical Observatory in Kyiv, specialists of State Scientific Center of Nuclear and Radiation Security on the initiative of State Nuclear Regulatory Inspectorate of Ukraine examined in addition the territory of Nauky Avenue and adjacent streets.

The maximum equivalent dose rate figure demonstrated by examination of the area was 0,16 mSv/h. This is normal radiation background, so there no reasons for public anxiety. We will remind, on 29 October, in one of rooms of the Borys Sreznevsky Central Geophysical Observatory, permissible radiation background was exceeded. During inspection of one of rooms of the physical and-chemical laboratory building, the permissible equivalent dose rate was exceeded. The maximum recorded EDR value in the room was 620 μSv/h, in the adjacent one: 170 μSv/h.

Radon Corporation employees have withdrawn the revealed radiation sources and transferred them to the enterprise for storage.

The inspection of the area around the Central Geophysical Observatory after withdrawal of the sources showed that the radiation background remains within the acceptable limits (maximum recorded EDR value is 0.17 μSv/h). Man-made radionuclides were also not found in the inspected area.

Before Implementing Small Modular Reactors, Make Sure They Are Safe — Grygoriy...