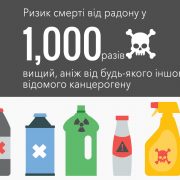 The new revision of the Law of Ukraine “On Human Radiation Protection” will come into force soon.  The amendments stipulate that the development and approval of the Action Plan on reducing exposure of the public to radon and its decay products, minimization of long-term risks from radon spread in residential and non-residential buildings, at workplaces, against any radon spread from the soil, building materials or water were added to the powers of the Cabinet of Ministers of Ukraine. Such National Action Plans (also called National Radon Action Plans) are available in almost every developed country in the world. These Plans envisage such priority measures as measuring radon concentrations in premises (residential, public, office), revising construction standards and rules, technical and design documents, improving awareness of the public, construction experts and designers about radon risks for health, etc.

Why is there so much noise around radon?

Radon isotopes (there are several) are included in the radioactive series of natural uranium and thorium. In general, the radon-222 isotope is considered as a radiation hazardous factor. By its physicochemical properties, radon is an inert, odorless and tasteless gas. It is the only noble gas that has no stable and long-lived isotopes. Radon is easily soluble in blood, water and other body fluids. It is much better soluble in fats, which results in its effective absorption by adipose tissues upon entering the body. Radon can penetrate the body even through intact skin.

From a purely technical point of view, due to its low reactivity, radon itself does not pose a serious health threat. However, the radiotoxicity of its decay products (short-lived isotopes of polonium, bismuth, lead) is very high. In environmental conditions, decay products, which are metals, are attracted to the smallest particles of dust, water droplets, forming a mixture that is inhaled by a human and sinks into the lower, most vulnerable respiratory tract. The bronchial-pulmonary system of the person is the target organ for decay products. The decay of radon nuclei and their daughter isotopes in the lung tissue causes micro-burns, since all the energy of alpha particles is absorbed at almost the point of decay.

Therefore, radon is considered to be a source of radiation hazard, since there are radon decay products wherever radon is present. How does radon get into houses?

The concentration of radon in the air depends mostly on the geological situation: granites having a lot of uranium are active sources of radon; at the same time, there is little radon above the sea surface. It also depends on the weather: the microcracks through which radon comes from the soil are filled with water during the rain; snow cover also prevents radon from entering the air. If one measures the radiation background on the street in a heavy rain, it will turn out that it has increased (sometimes even two or three times). This is not a “Chornobyl rain” and not a consequence of Fukushima, it is just the decay products of radon from a kilometer-long layer of atmosphere collected on the Earth’s surface due to precipitation.

Radon easily penetrates such materials as paper, skin, low-density plastic (for example, plastic bags), most paints and building materials, such as drywall, concrete block, mortar, wood panels, and most insulation. How does radon get into houses?

In addition, the building materials themselves can also be the source of radon and not just granite or granite sands in concrete. The most dangerous option is phosphogypsum, which consists of waste from the production of phosphate fertilizers. Often it is added to “ordinary” gypsum, so even the plaster may be the source of radon.

Usually, it is not necessary to live in a granite cave with a high uranium content to get a dose of radon radiation. Radon is released through deep faults and cracks. Therefore, gas can be emitted very actively in different regions. If you live in a high-rise building, then do not think that radon is not your problem and that it poses a threat only to the basement and ground floors. High radon concentrations can also be found on the upper floors of high-rise buildings, where it comes through communications.

According to the Radiation Safety Standards of Ukraine (NRBU-97), the level of radon for existing (introduced before new technical standards) of living premises is 100 Bq/m3 and 50 Bq/m3 for new buildings. Physically, it is the number of decays of its nuclei per second in one cubic meter of air. One decay per second corresponds to 1 Becquerel (Bq). Becquerel per meter cubic Bq/m3 if a unit of activity concentration of a radioactive source and the content of radon in the air is measured in these units.

What do these levels mean? By analogy, a permanent stay in the room even with a permissible radon level of 100 Bq/m3 is equivalent to smoking four cigarettes a day, and it is approximately equal to 100 radiographs of lung per year at an effective dose.

Unfortunately, radon gas is the second most common cause of lung cancer after smoking. According to WHO report, up to 14% of all lung cancer in the world is related to human exposure to this particular radioactive gas. The second major critical group for radon exposure is children. The formation of exposure doses for children is due to:

A child studying in an elementary school, who spends eight hours a day 180 days a year with twofold exceeding of permissible radon level, will receive ten times more radiation exposure than if the child lived in a control area of a nuclear power plant. People lived with radon for hundreds of thousands of years. Should not they have got used to it?

In fact, this is not true, because the accumulation of radon in dangerous concentrations is a consequence of civilization, the construction of houses that are traps for this gas.

The well-known fact is that radon baths can be used as treatment. Can radon be useful?

If you search for “radon Ukraine” in Google, then more than ten first links will be to radon treatment. The fact is that radon has long been considered non-radiotoxic due to the fact that it is practically not absorbed and does not accumulate. Therefore, radon was used as treatment in the times of fascination with the endless possibilities of radiation. Radon baths are essentially short-term skin irradiation with a likely, but not proven positive effect. The International Commission on Radiological Protection (ICRP) and the United Nations Scientific Committee on the Effects of Atomic Radiation (UNSCEAR) concluded that the optimistic view of the positive effects of low doses of radon radiation was not sufficiently justified. The observations cannot be significantly reproduced and positive clinical effects can be explained by concomitant factors and do not exclude carcinogenic effects. In addition, radon baths are not indicated for all (for example, one of the contradictions is smoking). Of course, their course is very limited.

How can one detect a hazardous indoor radon concentration?

A conventional dosimeter would not be suitable for this purpose, since radon, although a source of half of the natural background radiation, is not easily detected. Much more complicated devices are used to measure it. The content of radon in the air is subject to serious fluctuations, both daily and situational: even open doors can significantly reduce its concentration. However, for a short period of time.

High-quality radon radiometers are not cheap and cost up to hundreds of thousands of hryvnias or even more. It is easier to order a measurement in a specialized laboratory.

What has to be done?

Call SSTC NRS experts, who have the appropriate equipment and make the necessary measurements on site. Upon the measurement results, according to the type and location of the room, it is possible to select measures, which will help to reduce the harmful effects of radon. This can be either a choice of different design solutions that prevent radon entering from soil to the building or a ventilation system (forced or natural) to permanently remove radon from the indoor air.

Still, there is something you can do right now and do on a permanent basis: regularly ventilate rooms you are staying in. Regular ventilation (provided that there is an inflow of air from the outside and not from the soil) will reduce indoor radon concentration by a dozen times. The lower the concentration of radon in a living room, the lower the risk of lung cancer, since the threshold value of the concentration below which radon does not pose a threat to human health is currently unknown.

Measurements of the average daily indoor radon concentration will be available from the SSTC NRS starting from the third quarter of 2020. 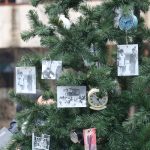 How 2019 Was Seen Off in Prypiat
Scroll to top