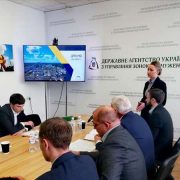 On 24 February, Acting Head of the State Agency of Ukraine on Exclusion Zone Management Kateryna Pavlova presented the public report on the Agency’s activities for 2019 and plans for the current year.

The main tasks performed by the SAUEZM last year were related to the process of Chornobyl NPP decommissioning and Shelter transformation into an environmentally safe system, radioactive waste management, etc.

In particular, comprehensive tests for the systems and equipment of the New Safe Confinement (NSC) were completed, and the SAUEZM received relevant documents on its preparedness for operation. Comprehensive “cold” tests of the dry spent fuel storage facility (ISF-2) were also completed. The SAUEZM will now work on obtaining the SNRIU permit for trial and commercial operation of the NSC startup package (SP-1). In addition, it is planned to perform “hot” tests at ISF-2 in 2020. Kateryna Pavlova emphasized the Agency’s participation in the development of laws and other regulatory documents. This is, first of all, the law “On Amending Certain Laws to Improve the Legislation on Radioactive Waste Management” (adopted in October 2019), which implements an up-to-date radioactive waste classification system that meets all international safety standards.

The SAUEZM also supported President Decree No. 512 “On Certain Issues of Developing Territories Subjected to Radioactive Contamination Resulting from Chornobyl Accident” (July 2019) and some resolutions of the Cabinet of Ministers of Ukraine.

The Acting Head of the SAUEZM told about the plans to complete “hot” tests of the centralized long-term storage facility for spent radiation sources (CLTSF) in 2020, to clean up the Tsybuleve radioactive waste burial, and also to start activities on high-level waste transport from the Odessa branch of the Radon State Corporation to a specialized storage facility in the exclusion zone.

During the last year, the Chornobyl exclusion zone was visited by 124,000 tourists. A significant increase in the flow of visitors encouraged the Agency to introduce an electronic ticket and develop new tourist routes. In the future, the SAUEZM intends to digitize existing routes, launch a new zone brand and implement project “Chornobyl. Revival Zone” initiated in November 2019 by President Volodymyr Zelensky and Prime Minister Oleksiy Goncharuk as a program to attract investment.

It is also planned to create an international scientific hub in the exclusion zone to provide studies and development of Chornobyl-related science.

“Meeting the principles of transparency in activities, namely, full digitalization of all processes in the SAUEZM and the enterprises of the zone, will help to improve the analysis of effectiveness of our joint work and use of funds. Chornobyl in a smartphone is not only a reality, but also a requirement of the time”, Kateryna Pavlova said.

According to the State Agency of Ukraine on Exclusion Zone Management

Report on SNRIU Activities for 2019 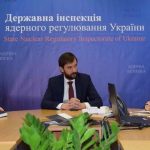 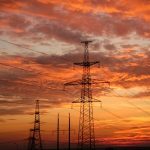