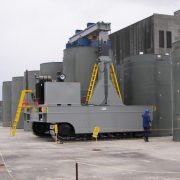 The final works on the construction of the Centralized Spent Fuel Storage Facility are planned to be completed by December 31, 2020. NAEK Energoatom announced the relevant tender in February and will accept applications until April 9.

The auction under the tender “Works on Completion of Construction on the Ste: Centralized Storage of Spent Nuclear Fuel of WWER Reactors of NPPs of Ukraine” is scheduled for May 15, 2020. The expected cost of the works is UAH 655.8 million.

As Energoatom’s spokeswoman Ilona Zayets said in a comment to Ukrainian Energy, that an additional tender is needed to include works that were not taken into account in the main contract.

According to her, quarantine due to the spread of coronavirus did not affect the construction process.

“Currently, preparatory works are underway at the NPP — in the regular mode. So the quarantine did not affect, “said Zayets.

Construction of a centralized storage facility for spent nuclear fuel in the Chornobyl Exclusion Zone began in April 2017. The construction work was expected to be completed in the first quarter of 2020, and the commissioning of the storage facility will begin in April.

Spent fuel from Rivne, South-Ukrainian and Khmelnytsky NPPs will be stored at the CSFF.

According to Ukrainska Energetyka

How to Become an Atomist? A Detailed Guide to the Profession Published
Scroll to top