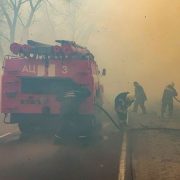 On April 4, grass and forest litter in Kotiv Forestry in the Exclusion and Unconditional (Compulsory) Resettlement Zone caught fire. The fire broke out near the village of Volodymyrivka and spread to forest areas near the villages of Poliske, Zhovtneve, Ragivka and Rudnya Ososhnya.

On April 6, firefighters extinguished a fire on an area of ​​5 hectares near Ragivka, but continue to fight individual fires on a total area of ​​about 20 hectares.

The State Emergency Service (SES) had to involve aircraft: 2 planes and a helicopter, which dropped 174 tons of water, to extinguish the fire, which was complicated by the increased radiation background in some areas,

Employees of the Department of Emergency Preparedness and Radiation Monitoring of the State Scientific and Technical Center for Nuclear and Radiation Safety are monitoring the development of the radiation situation in Kyiv. On April 5, the department, using the RODOS decision support system, conducted a series of forecast estimates of the spread of potentially contaminated clouds from the fire zone. Forecast calculations of the concentration of Cesium-137 in the surface layer of the atmosphere in Kyiv showed that on the night of April 4-5, they did not exceed 1.2 mBq / m3 with a permissible level of 800 mBq / m3 (according to the Radiation Safety Standards of Ukraine NRBU-97). The results of the forecast show that at 10:00 on April 5, the concentrations of Cs-137 in the surface layer of atmospheric air in Kyiv fell sharply to values ​​below 0.01 mBq / m3.

Also, the specialists of the Department of Emergency Preparedness and Radiation Monitoring of the SSTC NRS measured the radionuclides content in the air at the optimal point with the most probable estimated increase in the radiation situation due to the fire. The optimal point for field measurements in the Kyiv suburb of Gostomel was determined by modeling on the basis of meteorological forecast and information on the possible area of ​​the ignition zone, available as of 12:00 on April 5.

Measurements using the RanidSONNI mobile radiology laboratory and special portable equipment showed no signs of man-made radionuclides in the field. Measurements with air sampling in the field showed the value of the dose rate of gamma radiation in the range of up to 0.1 μSv / h (natural radiation background)

Thus, as of April 5, the fire in the Chornobyl Exclusion Zone did not affect the radiation background in Kyiv and its environs.

As the National Police of Ukraine found out, the culprit of the fire was a resident of the Ragivka village, who set fire to garbage and grass in three places for fun. Due to the strong wind, the fire began to spread further so that it was no longer possible to extinguish it alone.

According to the SES of Ukraine, SSTC NRS, SAEZM, National Police Main Directorate in the Kyiv Oblast.

How to Become an Atomist? A Detailed Guide to the Profession Published 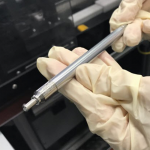