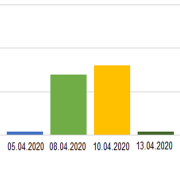 Since 5 April 2020, the State Scientific and Technical Center for Nuclear and Radiation Safety has been monitoring the radiological situation in Kyiv and adjacent territory in connection with forest fires in the Chornobyl exclusion zone.

The experts use the following resources to predict and evaluate the radiological situation:

–RODOS DSS forest fire module with databases on radionuclide contamination (in particular, cesium-137) and vegetation on the exclusion zone territory;

– messages from the SAUEZM duty officer;

– data from the mobile radiological laboratory.

On 9 April 2020, air masses moved north and northeast of the Chornobyl exclusion zone.

The measurements showed that cesium-137 concentrations in the air were not higher than 10-3 Bq/m3. As of 13 April 2020, the monitoring and forecast indicated the following:

– concentrations of cesium-137 recorded by devices of the mobile radiological laboratory were at least two orders of magnitude lower than the acceptable levels established by radiation health and safety standards and did not pose a radiological threat;

– even the most conservative calculations indicated that probable individual internal doses caused by the temporary increase would not exceed 0.01 µSv, while the annual effective dose limit is 1000 µSv (1 mSv).

This calculation was based on a conservative assumption that a conditional person was continuously breathing air with the concentration of cesium-137 that was higher than the background level from 5 to 13 April.

Over the day of 14 April and at the beginning of 15 April, potentially contaminated air masses were moving in the southern and southeastern directions. In this period, atmospheric precipitations up to several mm/h were observed throughout the Kyiv region.

The updated modeling results indicate that the potential maximum concentrations of Cs-137 in the surface layer in Kyiv were lower than 0.1 mBq/m3. The forecasted concentrations are less than those observed previously and constitute more than one thousandth of the acceptable levels established by NRBU-97. They do not pose any harm to the health of the population.

Given the radiological situation, no additional radiation protection measures beyond the exclusion zone are currently needed.

According to SSTC NRS.

The First Power Unit of the Belarusian NPP Sill Start its Performance in July... 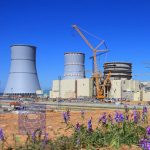 The Fire in the Exclusion Zone Bypassed the Spent Nuclear Fuel Storage Faci...
Scroll to top