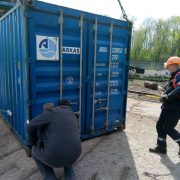 Signs of radioactivity in the container were found on April 16, when at the “Sortuvalna” station  in “Dniprospetsstal” A.M. Kuzmin Zaporizhia Electrometallurgical Plant” a stationary radiation monitoring system  on a railway platform with a container. Two pieces of scrap were found in a container, which looked like metal pipes with flange mounting 0.85 m long and 0.26 m in diameter each. The total mass of the fragments was 167 kg. According to the measurements of the factory laboratory of radiation safety and radiation control and the Radiation Safety Service of the Dnipro inter-Oblast branch of the ‘Radon’ Association, the equivalent dose of gamma radiation maximum power was 7.5 μSv / h at a distance of 0.1 m from these pipes. Kyiv Streets’ Gamma Background is Within the Natural One 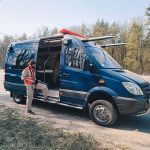