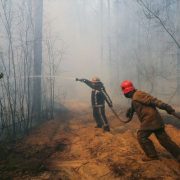 Firefighting in the forests of the Chornobyl Exclusion Zone continues. Firefighters are battling smouldering hotspots, where open fires break out time and again.

Struggle with fires continues in the territory of Korogod, Lubyanka, Paryshiv, Dytyatky and Denysivyka forestries. The main efforts are aimed at localizing two spots of stump smouldering  (Kryva Gora and Rudky – Buryakivka), wood and peat residues in the foci. The center of decay in the village. with. Drought has been eliminated. Work is underway to eliminate the consequences of fires in the area of ​​the Chapayivka village and the village of Kryva Gora (peat bogs smoke), peat bogs near the Poliske village.

The fire in the village. Korogod was eliminated on April 20.

“The main centres of fire are located near the villages of Buriakivka, Rozsokha and Kryva Gora. Every effort is made to destroy separate smouldering areas of grass, stumps, forest litter and wood residues as much as possible. Peatlands are smoking near the village of Chapayivka and the village of Poliske,” the press service of the State Emergency Service said. Individual smouldering spots of grass, stumps, forest litter and wood residues are flooded as much as possible to prevent fires and prevent new ones. There are fire pumping stations for extinguishing peatlands in the vicinity of ​​Kryva Gora (Paryshiv Forestry) and Poliske township (Kotiv Forestry). On April 25, the aircraft worked in the area of ​​the village Tovsty Lis, where smouldering spots were. In some areas, in conditions of smoke, drones with thermal imagers are used to detect centres of ignition.

The effeсts of previous fires in the above-mentioned forestries were localized by four combined detachments created by the SES. Rescuers from the State Emergency Service are assisted by employees of the forest fire stations of the ‘Pivnichna Pushcha’ State Fire Service. According to the SES, each combined detachmentis equipped with a dosimeter. Helicopters and heavy engineering equipment and an additional eight road laying machineі of the Armed Forces of Ukraine for laying mineralized strips were used to discharge fire extinguishing substances to the smouldering sites.

Number of forces involved in the fire fighting:

Since the beginning of the works, the fire aircraft has made 2230 discharges – 5130 tons of water.

There is no threat to the New Safe Confinement over the Chornobyl NPP, or to the radiation waste storage facility and other critical objects of the Exclusion Zone. The radiation situation is under the control of the SES, the radiation background does not exceed the natural one.

According to the SES of Ukraine. Photo: DSNS, Olekasndr Syrota.

A Radiation Anomaly Found in the Scrap in Zaporizhia