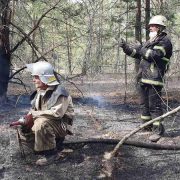 On April 29, in the Exclusion and Unconditional (Compulsory) Resettlement Zone, firefighters localized a forest fire, which the State Emergency Service (SES) has been eliminating since April 4. Rescuers are currently assisting the State Agency of Ukraine for Exclusion Zone Management to extinguish some foci of stumps, wood residues and peat bogs in the fires in the Lubyanka, Dytyatky, Kotiv, Denysivtski, Korogod and Paryshiv forestries.

Radiation background in Kyiv, Kyiv Oblast and in the Exclusion Zone are within natural background values.

A total of 590 people and 150 units of equipment from various services were involved in the firefighting, including 2 helicopters that dropped 104 tons of water on April 28 (5,294 tons of water since the start of work).

According to the SES and SAEZM.