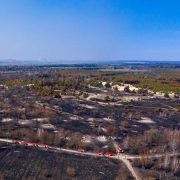 Firefighting in the Chornobyl Exclusion Zone continues. Firefighters and employees of the forest fire stations of the Pivnichna Pushcha State Enterprise are flooding some smouldering spots of wood and peat bogs. Employees of the Centre for Organizational and Technical Support of the Exclusion Zone (COTiZ) are inspecting the territory of the zone where the fire was raging. Most infrastructure facilities, including Pripyat, were not affected. However, a dilapidated wooden house on the outskirts of Chornobyl burned down and some farm and residential buildings in the Chornobyl-2 military camp were slightly damaged.

The “Kazkovy” pioneer camp near the village of Ilovnytsia was damaged severely. “Only two-story buildings near the river survived, but almost the entire left side of the camp burned down. The question of his future fate will be decided after the fire is extinguished,” the State Agency of Ukraine for Exclusion Zone Management said. The abandoned village of Kryva Gora was also completely burnt down — firefighters stopped the fire on the border with the village Zymovyshche. The fire also passed through the village of Rozsokha. In total, the fire affected 11,5 thousand hectares of the southwestern part of the Chornobyl Radiation and Biological Reserve. This is 5% of its territory.

“Large and medium-sized animals and birds escaped the fire, but rodents, amphibians, reptiles, insects suffered the most. As for the flora, certain plant communities were lost and damaged, as a result of intensive burning,” said Denys Vyshnevsky, head of the reserve’s scientific department.

Control rates of the equivalent dose remain within acceptable limits. 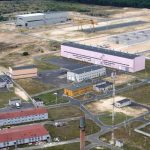 SAEZM Approved a Project for a Storage Facility for Ukrainian RAW, Which Was...
Scroll to top