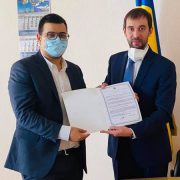 An individual permit for trial and commercial operation of SP-1 of the New Safe Confinement of the Chornobyl NPP Shelter was presented by Chairman of the State Nuclear Regulatory Inspectorate Hryhorii Plachkov to Deputy Minister of Environment Protection and Natural Resources of Ukraine Roman Shakhmatenko.

“Today, together we are taking an important and significant step towards radiation safety in the exclusion zone”, Plachkov said and wished his colleagues successful and safe work. An individual permit was issued by the SNRIU upon the Conclusion of the state review on nuclear and radiation safety of the application documents and positive results of ChNPP inspection conducted by the inspection commission on 14-17 July this year.

Trial and commercial operation is carried out to verify and confirm that systems, structures and components of NSC SP-1 and the facility as a whole function in accordance with the project, identified defects are eliminated, and the new safe confinement is prepared for further safe operation.

According to the plan, trial and commercial operation of the facility will continue one year and after successful completion, ChNPP should submit an application for a license to operate the confinement and Shelter to the SNRIU (within individual activities: processing , storage of radioactive waste). It should be recalled that construction of the first startup package of the Shelter new safe confinement was completed in 2019. Obtaining an individual permit is a condition of Chornobyl NPP license for Shelter operation, series EO 000033 of 30 December 2001.

Attempt to Take Blueberries and Mushrooms with Exceeded Radionuclide Content... 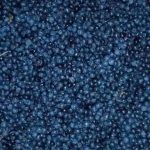 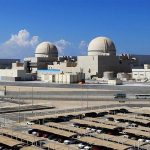 The First Arabian NPP Was Launched
Scroll to top