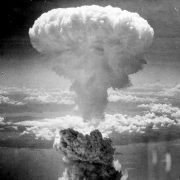 75 years ago, two atomic strikes from the United States of America shook the Empire of Japan. Two cities, Hiroshima and Nagasaki, were virtually destroyed, and dozens of thousands of their inhabitants died immediately. These bombings were not just another line in the chronicle of the Second World War, but an exceptional event that changed humanity’s understanding of weapons, war and radiation effects. This was the first use of new atomic weapons against people.

By early August 1945, Japan was the only state to resist the United Nations. In the Pacific Ocean, its army suffered a series of defeats from U.S. troops, and military operations approached the territory of Japan. The Red Army of the USSR threatened the Japanese occupation regime in the part of China’s lands.

The fierce struggle for the Japanese islands of Iwo Jima and Okinawa in March-June 1945 showed that the Japanese military forces were ready to fight fanatically, despite any losses. The military regime that had power in the country rejected any possibility of surrender and was preparing to give a decisive battle to the Allies’ armies in their homeland.

The decision to use atomic bombs was signed by U.S. President Harry Truman on 25 July. The bombs were not mentioned in the Potsdam Declaration demanding Japan’s unconditional surrender issued by the American, British and Chinese governments the next day. However, the Japanese refusal to comply with the ultimatum of 28 July added even more resolution to the U.S. leadership to use its “trump card”.

The world’s first atomic weapons appeared due to implementation of the American Manhattan project. A group of American and European scientists (including Ukrainian Georgiy (George) Kistiakovskyi) under the leadership of Robert Oppenheimer worked since 1942 to 1945 and created three samples of atomic bombs. The first exploded during trials on 16 July 1945 and the other two were intended for combat use.

The first Little Boy bomb contained 64 kilograms of highly enriched uranium-235; slightly more than 1% of this mass participated in the nuclear chain reaction for the explosion. Its power was, according to various sources, 13-18 kilotons of TNT. The second Fat Man missile was not equipped with uranium, but with 6 kilograms of plutonium-239, which increased its power up to 21 kilotons.

On 6 August 1945, American B-29 Enola Gay aircraft dropped the Little Boy on Hiroshima. The city was chosen as a target because it was an important center for the management of southern Japan defense: there were the headquarters of one of the armies, the navy, military port and a number of ammunition depots.

On that day, Mitsubishi engineer Tsutomu Yamaguchi, who had come to Hiroshima for work, was on his way to the shipbuilding yard. “It was a clear, really good day, nothing out of the ordinary”, he recalled. At 8:15 am, he heard an aircraft noise. “I looked up into the sky and saw a B-29 dropping two parachutes. I looked at them, and suddenly, there was a big flash in the sky like a flash of magnesium and I was knocked down”. When Yamaguchi regained consciousness, he saw a giant mushroom-like column of fire. Tsutomu Yamaguchi was one of the few hibakusha who survived both bombings. He died at the age of 93 in 2010. Source: Wikipedia

“It looked like a tornado, although it did not move, but grew and expanded at the top”, he said. “It was accompanied by prismatic light twinkling in an inextricable rhythm like a kaleidoscope”.

The bombing on the first day killed about 80,000 residents of the city. In the first minutes of the explosion, almost everyone who was at a distance of up to 800 meters from the epicenter died. The light radiation instantly turned people to ash leaving only outlines on the walls and sidewalks. The body of fire turned into a fiery tornado, which destroyed everything within a radius of 1.5 km from the epicenter. The radius of the explosion destructive effect reached 10 kilometers.

Tsutomu Yamaguchi sat in the bomb shelter for the rest of the day, and the next day he went home to heal his burns in the hospital and continue his work. Further events seem to be a fatal coincidence of unfortunate circumstances

The city where he lived and worked was Nagasaki. On 9 August, when a bandaged Tsutomu Yamaguchi arrived at the Mitsubishi shipyard office, B-29 Bokskar bomber was heading to the city to drop the Fat Man on it. However, Nagasaki was not the main target of the American aviation. According to the plan, B-29 should make an attack to Kokura, where the largest military arsenal in Japan was located. However, bad weather and visibility did not allow this and the plane turned to an alternate target: Nagasaki.

The city was the center of industry, where steel, guns, torpedoes, various military equipment and ships were manufactured: at the shipyard where Yamaguchi worked. He was just talking to his boss, when at 11 o’clock the city felt a shock: it was the Fat Man that exploded. Tsutomu Yamaguchi was not injured this time.

However, those on the street described apocalyptic pictures. “A dazzling light hit my eyes, in which khaki, yellow and orange colors were mixed … After a moment the light turned bright white. I remember I had the feeling that I was alone in the world. Then a tremendous roar was heard, and I lost consciousness”, Reiko Nada said, who was 9 years old then. The explosion of an atomic bomb in Nagasaki. Source: atomicheritage.org

When she regained consciousness and was heading to the bomb shelter with her mother, she saw the following: “I didn’t have any scratch on me. Mountain Kompira saved me, but people who were on the other side of the mountain suffered terribly. Those who somehow got out of there had their eyes popped out of their sockets and their hair was tousled, almost all were naked, because the clothes were burnt and burned skin hung from them in shreds”.

At a distance of up to a kilometer from the explosion epicenter, all people and animals died almost instantly. Almost not a single intact building remained within a radius of two kilometers. A firestorm, as in Hiroshima, did not occur, but the blast wave and subsequent fires completely destroyed or partially damaged almost 90% of city buildings.

Human casualties were not limited to those killed on the bombing day. People continued to die from wounds, traumas and diseases caused by bombing consequences in the following months. Until the end of 1945, the total number of victims in Hiroshima ranged from 90 to 166,000 people, and in Nagasaki: from 60 to 80,000. Moreover, doctors began to diagnose clinical cases unknown to them: when people who survived the bombing died a few weeks after it … This was manifestation of radiation sickness caused by atomic explosions. The panorama of Hiroshima after the bombing. The arrow shows the explosion epicenter. Source: allworldwars.com

By the way, at first, no attention was paid to radioactive contamination: people simply did not know about its presence. Therefore, after the bombing, the population was not evacuated from both cities, they were restored in order to repopulate.

The political leadership of Japan was shocked. On 10 August, it agreed to surrender and on 15, military operations were terminated. The country signed an official surrender document on 2 September 1945 thereby putting an end to the six-year World War II.

The following decades were marked by the proliferation of nuclear weapons in the world, as well as development of the power of charges and their delivery vehicles, so that the Little Boy and Fat Man look like babies against up-to-date nuclear arsenals. However, fortunately, nuclear weapons were never used against humans again.

Historians and politicians are still carrying on polemics regarding justification of the Hiroshima and Nagasaki atomic bombings. Supporters point out that the tremendous impression that the use of bombs made on the Japanese leaders accelerated the decision to surrender. Otherwise, they say, Japan could only be overcome by landing a large number of troops on its islands. The experience of similar operations in other theaters of war, as well as readiness of the Japanese militarists to wage an all-out war sacrificing everyone who is capable to carry arms showed that a full-scale invasion would cause multimillion casualties both among the allies and among military and civilian Japanese. Therefore, it turns out that the atomic bombings saved many more lives than they took. Hiroshima. Such shadows remained from people who were burned alive in the explosion

Those who disagree point out that the United States had other motives for using atomic weapons. After all, Japan was already weakened under the onslaught of American and Soviet troops, and its surrender was a matter of time. Opponents note that destructive power of these weapons caused significantly more damage to civilians and infrastructure than to military installations. According to opponents, the main purpose of using nuclear weapons against Japan was to demonstrate the power of the United States to the whole world and, above all, to the Soviet Union. Due to this, the bombing of the second city was even more unjustified.

Indeed, it is reliably known that during choosing targets, the American military command relied on the psychological effect of the bombing as one of the most important factors. Another factor was conditions that would help to better disseminate the information about the destructive power of weapons in the world. Therefore, Kyoto, the ancient capital and important cultural and economic center of the country was among the doomed cities, which the U.S. Ministry of War struck from the list at the last moment.

The debates about the role of atomic bombs in approaching the end of the world war is unlikely to end soon. However, humanity can learn important and, perhaps, even salutary lessons from these two episodes. The colossal destructive effect of atomic weapons showed that there is no difference for it where the combatants are and where the civilians are: it demolish everything in her path. Any military use of atomic weapons will automatically mean numerous losses of civilians that do not participate in the war. Moreover, nuclear charges in modern ballistic missiles are capable to transform areas as large as entire countries into desert. Mitsubishi torpedo plant in Nagasaki after the explosion

For those who did not die immediately, the products of the atomic explosion cause severe injuries and incredible suffering. In addition, radiation exposure is reflected in far-reaching health damage that can cause death months or even years later. The survivors in Hiroshima and Nagasaki (they are called hibakusha) often had poor health until the end of their lives and often suffered from cancer.

Hiroshima and Nagasaki represented single nuclear strikes from one belligerent party, so only the inhabitants of these cities felt their consequences. However, if, hypothetically, a war starts between several nuclear states, then an exchange of strikes will certainly mean unprecedented destruction, human casualties and a planet-wide ecological catastrophe up to the destruction of the whole creation.

Besides, considering these deadly consequences, the danger is heightened by the likelihood that atomic weapons will be in the hands of some unpredictable dictator or fanatic terrorist group.

Therefore, Hiroshima and Nagasaki should remain in history as a warning to humanity and a reminder that atomic energy should only serve for peaceful purposes.

The First Arabian NPP Was Launched

To Be or Not to Be or Everything You Wanted to Know about KhNPP-3, 4 Constr...
Scroll to top