The commemorative art event Chornobyl.35 was held in Pripyat

The Chornobyl.35 event in memory of the 35th anniversary of the Chornobyl disaster was held in Pripyat on the night of April 25-26. The commemoration took the form of an art event with the participation of accident witnesses, musicians, artists, poets and the clergy.

The main organizer and director of the action Oleksandr Syrota, who is a former resident of Pripyat and chairman of the Public Council at the State Agency for Exclusion Zone Management, described the purpose of the action as follows: “For several years in a row, we are gathering in Pripyat on the night of April 26 to honor the memory of those who gave their lives and health, left home and everything that was dear to him because of the Chornobyl NPP  accident». Photographer Denys Kopylov presented his photo exhibition — the project “Chornobyl. Ark”, the central idea of ​​which is the “settlement” of the Exclusion Zone by animals filmed all over the world. The author of the photos Denys Kopylov tells journalists about the essence and features of his photo project “Chornobyl. Ark” during the event dedicated to the 35th anniversary of the Chornobyl disaster, April 26, 2021 Photo: Oleksandr Khomenko / hromadske

Participants of the music and poetry project “Evterpa” read poems by famous “Chornobyl” authors and their own works. It was accompanied by a musical improvisation performed on the virtual instrument PRIPYAT Pianos, which reproduces the piano abandoned in Pripyat (composer — Volodymyr Savin).

At 1:23 a.m. April 26, at the time of the explosion at the Chornobyl Nuclear Power Plant’s Unit 4 35 years ago, participants lit 35 candles, according to the number of years after the disaster. 35 candles lit in the central square of Pripyat on the day of the 35th anniversary of the catastrophe, April 26, 2021 Photo: Oleksandr Khomenko / hromadske

In conclusion, Ivano-Frankivsk National Academic Drama Ivan Franko Theater showed the play “Nation” based on the novel by Maria Matios in the central square of Pripyat. The play “Nation” based on the novel of the same name by Maria Matios, performed in the central square of Pripyat by actors of the Ivano-Frankivsk National Academic Ivan Franko Theater, April 26, 2021 Photo: Oleksandr Khomenko / hromadske

The leitmotif of this part of the action was loneliness, which, according to the organizers, will always be felt by people who were forced to leave their homes.

The Pripyat.com Centre held an action to commemorate the Chernobyl disaster for the first time in 2018. 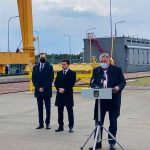 IAEA Director General: “You can count on us”
Scroll to top