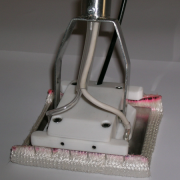 Known methods of electrochemical removal of radionuclides are practically unsuitable for decontamination of oversized equipment (heat exchange equipment, pipelines and connections, devices for loading fuel elements, etc.) in stationary conditions, as they require the creation of baths of appropriate size, high unit costs of reagents and electricity. And to remove radionuclides from internal surfaces (for example, pipelines), these methods are generally incapable.

Scientists of the V.I. Vernadsky Institute of General and Inorganic Chemistry of the NAS of Ukraine, the National University of Food Technology and the Institute of Nuclear Research of the NAS have created a device for electrochemical decontamination, which avoids these problems.

Radionuclides accumulate mainly in microcracks and microcavities of the surface layer of equipment (about 50 μm) formed by oxide compounds. During electrochemical decontamination, this layer is destroyed by current, and the elements that form it are converted into compounds that accumulate in the solutions by which this procedure is performed.

The surface to be deactivated is connected to the positive pole of the DC source (or made one of the electrodes if AC is used). Translational movements move the remote cathode, which is in contact with the anode through a layer of porous dielectric material saturated with a solution by which radionuclides are removed (Fig. 1).

Fig.1. The principle of extraction of radionuclides in the mode of the remote electrode from open (on the scheme on the left) and internal (on the right) surfaces

The cathode is equipped with a telescopic rod, which is mounted devices that provide electric power, continuous supply of solution to the porous dielectric, moving the surface of the anode with any inclination, rapid replacement of porous material when saturated with radionuclides. Thus, the service staff loses the need to contact the source of radioactive contamination (Fig. 2).

Radionuclides that pass into the solution during electrolysis accumulate in the porous material (silica or basalt multilayer tissues). The specific consumption of the solution when using these materials is estimated at approximately 3-4 ml / dm2 of surface.

Unlike the stationary mode, the developed method allows to deactivate the equipment without dismantling from the place of operation and without size restrictions.

The obtained results showed that electrochemical decontamination allows to reduce the level of surface contamination of various fragments of technological equipment to the norms that allow safe operation by maintenance personnel. 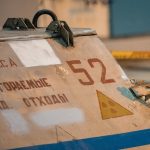