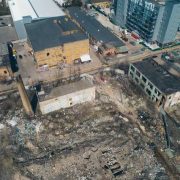 Hazardous waste of the Radikal Kyiv plant is planned to be disposed in the 10-kilometer ChNPP zone, since, according to representatives of the Kyiv City State Administration, the only enterprise in Ukraine that processes mercury-containing waste is located in the occupied territory.

The city authorities appealed to the Government to jointly resolve the issue of mercury disposal, whose amount is about 200 thousand tons.

Currently, there is an order of the Prime Minister of Ukraine to develop a state program for  processing of hazardous waste in the exclusion zone. This is not just about transfer and storage, but about processing. The city has a technical solution and is ready for active work.

The Radikal state enterprise started its work more than 60 years ago. In 1994, the company was privatized, and in July 1996, it was closed without observing the relevant environmental requirements.

According to the Kyiv City State Administration

Rules for Preparation and Submission of Publications for Blogs Section