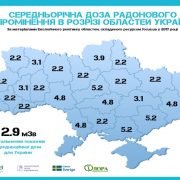 In the past decade, housing construction has revived in the United States, which, in turn, has led to the need to intensify campaigns to protect the public against harmful effects of radioactive gas radon. As it turned out, the current risks from radon were commensurate with those in 1986, when the last National Radon Risk Assessment Campaign was carried out in the country.

Although, the Standards and Protocols for Measurements and Measures to Mitigate Radon Impact on Human Health integrated into the licensing and certification system, into activities of the special Environmental Protection Agency (EPA), national proficiency programs (National Radon Proficiency Program AARST- NRPP) and the National Radon Safety Board (NRSB) were in force at that time, they were not effective enough and needed revision.

To resolve the issue, the working group was convened, which included representatives of a number of US ministries and departments, in particular, the Department of Agriculture, Department of Defense, the Department of Energy and others. They developed 33 obligations that each of entities agreed to fulfill. Thus, in 2010, the National Strategy for Saving Lives was developed. The strategy was based on four approaches:

b) financial incentives and direct support for radon reduction measures;

The strategy was estimated to prevent 3200 radon-related lung cancer deaths by reducing gas concentration in 5 million American homes. Subsequently, other entities joined the implementation of the Strategy, and now, due to this, a truly effective system to resolve the issue was developed in the United States. Now in the USA there are 5 hot lines, one way or another related to radon, the radon map of the country is freely available, and everyone has the opportunity to purchase special equipment to measure radon and get advice from experts who will decipher the result and give professional recommendations.

For the convenience of users, the information on organizations that can help with the issues of reducing radon concentration in building spaces is collected on one portal. In general, there is a detailed list of measures in the United States to reduce indoor radon levels that can be implemented by relevant organizations. In general, 13 techniques are provided, which can reduce radon levels by 99%. The cost of such activities ranges from 800 to 2500 dollars.

However, the National Strategy expired in 2020, so the United States needs to develop a further action plan to prevent radon contamination. However, their experience is positive and could be very useful for other countries, including Ukraine. Radon Levels in the United States

There are also territories in our country where the radon issue is very challenging. First of all, this is the Kirovohrad region with significant deposits of uranium ores. Radon is known to be generated resulting from uranium natural radioactive decay. Taking this into account, it is urgent to develop a program document that would allow systematic, thorough and consistent protection of the public against its destructive impact.

It should be noted that even before 2018, there were programs to ensure NRS in the region. They were based on fundamental scientific studies and actual data. In particular, according to one of the main components of the Comprehensive Program for the Protection of the Public in the Region against Radiation for 2014-2018, a number of comprehensive radiometric studies of premises and water from artesian wells for radon content were carried out, as well as environmental objects to determine the activity of natural radionuclides, impact of medical research, etc. However, it is expired, but nothing new was developed, although it was planned to introduce the State Target Regional Program for Radiation and Social Protection of the Public in the Kirovohrad Region and Kropyvnytskyi. A relevant concept was developed on the basis of a similar program, which is in force in Zhovti Vody for about ten years and represents a positive example of anti-radon measures on the territory of Ukraine. The concept of the State Program for the Kirovohrad region was developed at the initiative of the Kirovohrad Regional State Administration and Regional Council and should become a roadmap to solve the radon issue in the region. However, this program was not approved. Earlier, the regional Stop-Radon program was in force in the region. Within its framework, radon-222 content in the air of 187 preschool and educational institutions was studied. The measurement results showed that the radiation and health standard established for such institutions was exceeded in more than 70% of the surveyed buildings (out of 30 premises in the Mala Vyska district, exceeded values were found in 23 ones, in 8 cases it was a 5-fold exceeding and in 3 cases – 10-fold). In some educational institutions of the Kompaniyivka and Haivoron districts, the radon activity in the air exceeded the standards by 20-46 times.

Considering the above, the issue of development and adoption of a regional program to protect the public of the Kropyvnytskyi region is very urgent. It is quite possible that the US experience can play a very important role.

If COVID-19 Detected – Do not Hurry to Do CT