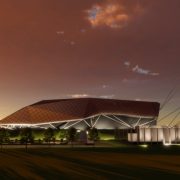 A rendering of a plant based on the Rolls-Royce SMR (Image: Rolls-Royce)

The Great Britain supports the development of nuclear energy as a way to reduce the use of fossil fuels, which contaminate the atmosphere and are perhaps the main cause of the global climate change. This, as well as plans to completely renouncing the use of fossil fuels by 2035, became the cause for the government’s support of the SMR introduction project.

The GB government recently provided funding of GBP 210 million to the Rolls-Royce engineering group, which announced the establishment of a new consortium – Rolls-Royce SMR Limited. In general, the project is estimated at GBP 455 million, in addition to the government funding, private investment is also envisaged.

“The SMR programme is one of the ways that Rolls-Royce is meeting the need to ensure the UK continues to develop innovative ways to tackle the global threat of climate change,” said Rolls-Royce CEO Warren East. “With the Rolls-Royce SMR technology, we have developed a clean energy solution which can deliver cost-competitive and scalable net-zero power. The business could create up to 40,000 jobs, through UK deployment and export enabled growth.”

A Rolls-Royce led UK SMR consortium aims to build 16 SMRs – based on small pressurized water reactors – each with a generation capacity of 470 MWe.  Completion of its first unit is scheduled for the early 2030s. After construction, the power plants will be handed over to be operated by power generation companies.