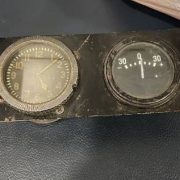 Timely detection and response to radiation-hazardous findings is an important element in ensuring the population safety. We recently wrote about the radiation control on the Ukrainian border, you can read about it in the publication Frontier for Radiation. How Radiation Control at the State Border is Carried Out, and already in October a case was recorded when a military (tank) watch contaminated with Ra226 (0.65 μSv/h) was detected in the luggage of a passenger of Boryspil Airport and confiscated. The find was handed over by customs officials for further radiation examination and safe storage.

Another case with the actuation of a stationary radiation monitoring system occurred in early November at PJSC “Azovstal Metallurgical Plant”. During the inspection of the railway depot, a wagon with scrap metal with a high level of gamma radiation (2.47 μSv/h) was detected. The railway wagon with scrap metal was going from the Kamyanets-Podilsky railway station of the South-Western Railway.

In accordance with the regulations, radiation inspection of the wagon was carried out to take further measures in the prescribed procedure.