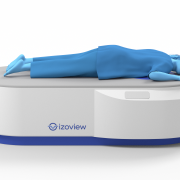 Engineers from Izotropic Corporation in Canada have completed the development of the IzoView Breast Computed Tomography Imaging Platform, which has special features to help secure patients and technicians during procedures.

After testing the subsystem, it was found that using it can significantly reduce the exposure of staff and patients, compared with exposure using traditional mammography equipment.

Currently, the IzoView The radiation imaging subsystem is now acquiring and producing preliminary images. Using different types of phantoms, i.e. objects simulating tissues of the human body, the calibration of the imaging system relative to the detector and the geometry of the imaging system for 3D reconstruction software was demonstrated.

Engineers can now begin optimizing and calibrating the imaging subsystem to acquire 360-degree images, which will significantly differentiate three-dimensional