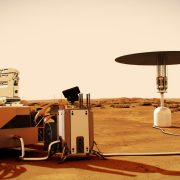 NASA expects proposals from the leaders of the nuclear and space industry for the development of a nuclear reactor applying innovative technologies of the nuclear fission surface energy system to provide electricity for missions to the Moon. It is envisaged to implement the project by 2030.

It is important for NASA that the nuclear reactor to be built on Earth, focuses on using low-enriched uranium as nuclear fuel. The reactor needs to fit inside a cylindrical transportable container four meters wide and six meters long, and cannot weigh more than 6,000 kg. No human intervention for the startup and shutdown operations shall be envisaged in the reactor.

The system must operate from the lunar landing module or lunar rover located on the space station, shall have the possibility to be removed from it and be transported to another area on the Moon, where its operation will continue. The nuclear fission surface energy system should produce 40 kW of continuous power. For comparison, the same number of kilowatts of energy is needed to supply electricity to about 30 households for 10 years.

The deadline for submitting the proposals is 19 February 2022. The total maximum cost of the design under the concluded individual contract is 5 million U.S. dollars.

The project will be funded by the National Aeronautics and Space Administration (NASA) with the support of the U.S. Department of Energy and the Idaho National Laboratory and will further develop the study of the Kilopower project (completed in 2018). Accordingly, this will be the start of the permanent activities of the base camps on the Moon and Mars.

The IzoView Radiation Imaging Subsystem Powered on and the Initial Images T...

Is the Commercialization of Nuclear Power Plants in Ukraine a near future?
Scroll to top