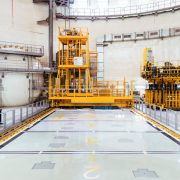 On 21 December, in Finland, the third Olkiuoto-3 power unit with the EPR-1600 reactor was brought to a minimum controlled power level, the permit was issued by the Radiation and Nuclear Safety Authority (STUK).

Generation of electricity by the new power unit will start with 300-400 MW at the end of January 2022, when it will be connected to the national grid. The power level will increase after start-up and testing.

The Finnish nuclear energy company Teollisuuden Voima Oyj calls the event historic. Olkiuoto-3 construction lasted almost 20 years. In 2002, the Finnish parliament voted to build a power unit 3, and the following year a tender was announced, which was won by the French company Areva. Initially, the start-up date was set for 2010, but later it was postponed to 2013, 2015 and 2018, respectively. The cost of construction amounted to 8.5 billion euros, which is three times the initial amount of 3 billion euros.

28 Years of Physical Protection of Nuclear Materials and Nuclear Facilities...
Scroll to top