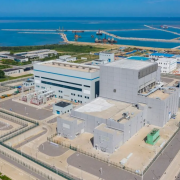 The HTR-PM high-temperature gas-cooled reactor was connected to the grid by China’s Shidaowan Nuclear Power Plant in Shandong Province.

Two small reactors have been installed at the NPP, which drive a turbine with the 210 MW capacity. The operating license was issued by the National Nuclear Safety Administration of China on 20 August this year, and in September the first reactor achieved first criticality, in November, the second one. On 20 December, one of them was connected to the grid, and gradually it is brought to full capacity (power level is not announced). After similar testing, a second reactor will be commissioned. The start-up is expected in mid-2022.

HTR-PM high-temperature gas-cooled reactors use spherical fuel-emitting elements with a ceramic coating. The fuel is low-enriched uranium. The core consists of 27,000 fuel elements and the coolant is helium.

According to China Nuclear Energy, the fuel has a high safety level, remains intact, and retains radioactivity even under extreme emergencies.

In total, 18 HTR-PM units are planned to be constructed at Shidaovan NPP.

“Protective” Accessories from 5G Proved to be Radiation Source