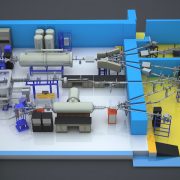 For more than half a century, scientists have been trying to solve the problem of “shadow corrosion” inherent in boiling water reactors (BWRs), which represent a third of nuclear power reactors in the United States, and finally, scientists of the University of Michigan were able to simulate in the laboratory the process that occurs on the surfaces of fuel channels near steel rod control and protection system (CPS).

“Shadow corrosion” affects zirconium alloy (Zircaloy) fuel rods and fuel channels, creating images of nearby parts on their surface. It can even lead to creation of pinholes and wrapping of channels between fuel assemblies potentially preventing control blades regulating the reactor power.

“Until now, shadow corrosion was never reproduced in laboratory autoclave experiments because the simultaneous effect of irradiation was needed. What the University of Michigan experiment has shown was the simulation of the actual plant situation” said General Electric representative said Raul Rebak.

A special high-temperature, high-pressure water cell that recreates the environment of a reactor core in the Michigan Ion Beam Laboratory was developed to enable this achievement.

Contact between Zircaloy fuel rods and the nickel alloy of the supporting structure creates a voltage that drives the corrosion reaction. But completing the circuit requires radiation to split water molecules, producing more reactive entities such as hydrogen peroxide. These form at the nickel alloy surface and then diffuse to the Zircaloy surface, accelerating its corrosion.

“This experiment will allow studying problems to the point where you understand the processes and then develop solutions”, said Harry Was, the Director of the Nuclear Engineering Laboratory.

Path to Independence and Collegiality