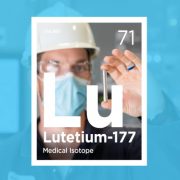 For the first time, a system for the production of lutetium-177 isotopes will be installed at the Bruce 7 nuclear power reactor. The medical radioisotope lutetium-177 (Lu-177), used to treat cancers such as neuroendocrine tumors and prostate cancer, will be fabricated using ytterbium targets irradiated in the reactor.

The isotope production system was developed by Isogen company in partnership with Kinectrics and Framatome as part of a project to study the production of lutetium-177 at Candu reactors between Bruce Power, a power generation company, and ITG, a subsidiary of the radiopharmaceutical technology company ITM Isotopen Technologien Munich.

The first step in the production of lutetium-177 is the irradiation of ytterbium targets in the isotope production system without the addition of a carrier. It is currently planned to commission the system and prepare for commercial production, which will start after the successful completion of these steps and the submission of regulatory documents.

The isotope production system is already installed at the Candu reactor, Canada’s heavy water reactor used to generate electricity, and will be able to produce other medical isotopes in the future.