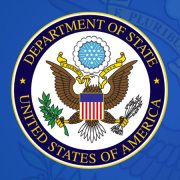 At the end of the last year, the Third Annual Joint Conference of Nonproliferation Program Participants was held online. It was organized by the Bureau of International Security and Nonproliferation of the US Department of State. The Office of Export Control Cooperation (ECC), Office of Weapons of Mass Destruction Terrorism (WMDT) and Office of the Non-Proliferation and Disarmament Fund (NDF) took part in the Conference and presented their strategic programs for 2022.

In particular, the Office of the Non-Proliferation and Disarmament Fund (NDF) for the current year has included support for the territorial integrity of Ukraine in its strategic program and the Office for Export Control Cooperation (ECC) has also focused on solving issues related to subversive and destabilizing activities of the Russian Federation. That is why the Office plans to take preventive measures aimed at strengthening the defense capability of Ukraine on land and sea borders, taking into account the insufficiency of its own resources (primarily the borders with Belarus, Moldova and Georgia, in the Azov and Black Seas); disruption of supply chains that contribute to the activities of the Russian defense and energy sectors, as well as criminal financial flows associated with Russian organizations and proxies.

At the same time, the strategic program of the Office of Weapons of Mass Destruction Terrorism (WMDT) in 2022 focuses on reducing the chemical and biological threat in South and Southeast Asia, regions of Sub-Saharan and North Africa, countering the global threats of radiological terrorism and supporting the efforts of the Partnership against Impunity for the Use of Chemical Weapons and holding accountable those who use chemical weapons, etc.

Radioactive Waste Can Be Recycled to Create “Diamond” Batteries