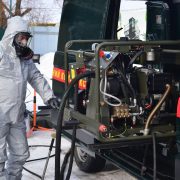 Professional meetings with representatives of the radiation, chemical and biological (RCB) protection troops of the Armed Forces of Ukraine, specialization of Support Forces, continue in the Military Institute of Tank Troops of the National Technical University “Kharkiv Polytechnic Institute”, whose purpose is to develop practical skills in the performance of functional duties on planning chemical, biological, radiation and nuclear protection for troops (forces) during the use of the Armed Forces of Ukraine and components of the defense forces.

Within the professional training at International State Border Checkpoint “Goptivka”, exercises were held on the operation and maintenance of stationary systems for automated control over the transfer of radioactive substances and nuclear materials under the leadership of the State Border Guard Service of Ukraine. During the exercises, the latest models of weapons and equipment used in radiation monitoring for detection of illicit transfer of radiation sources were presented.

SMR Simulator to Be Installed in Norway