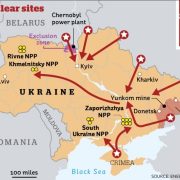 In Ukraine, there are 15 power units at four nuclear power plants: South-Ukraine, Zaporizhzhya, Khmelnitsky and Rivne. The Chornobyl nuclear power plant is at the stage of decommissioning, and the spent nuclear fuel storage facility has been constructed on its territory.

On the evening of 24 February, Prime Minister of Ukraine Denys Shmyhal announced that all the facilities of the Chornobyl nuclear power plant were seized by Russian invaders.

Currently, all operating nuclear power plants in Ukraine are operated in regular mode, but there is a high probability of invasion by Russian troops: there is a lot of military equipment on the territory of the Zaporizhzhya NPP, the enemy is trying to capture Energodar and gain control over the Europe’s largest nuclear power plant; Belarus is launching ballistic and cruise missiles that could hit the Khmelnitsky and Rivne nuclear power plants. Head of the Nuclear Safety Analysis Unit of the State Scientific and Technical Center for Nuclear and Radiation Safety Dmytro Gumenyuk explained to British edition “iNews” and Portuguese edition “SOL” about possible consequences of the Russian invasion and seizure of Ukrainian nuclear power plants.

First of all, Dmytro Gumenyuk notes that the design of Ukrainian nuclear power plants does not take into account the risk of the consequences of military operations, nuclear power plants are designed exclusively to generate electrical and thermal power for peaceful purposes. This means that they can be significantly damaged as a result of possible missile, tank attacks or bombardments.

Although Ukrainian nuclear power plants were constructed 30 years ago, all infrastructure, reactors and concrete structures are in good condition and, according to Gumenyuk, are considered among the safest in Europe. Ukrainian nuclear power plants can withstand the fall of small aircraft weighing less than 10 tons, but a targeted attack could damage them. For example, a nuclear disaster at the Zaporizhzhya NPP could cause radiation contamination of water in Dnipro, which then flows into the Black Sea and then into the Mediterranean Sea.

“There are 6 reactors at the Zaporizhzhya NPP, these are tons of radioactive fuel. Damage of one reactor will be a catastrophe not only for Ukraine, but also for neighboring countries, and damage of six reactors will lead to the fact that a half of Europe becomes an exclusion zone … Despite this hazard, the Russian military troops are still trying to attack the Zaporizhzhya NPP,” Dmytro Gumenyuk.

Not only nuclear power plants are in danger, but also spent nuclear fuel stored at them. For example, there are 22,000 assemblies of spent nuclear fuel at the Chornobyl NPP. In case of destruction of these assemblies, radiation will be released and this will make the territory of Ukraine, the Russian Federation and Europe radioactive.

“One VVER-1000 fuel assembly contains about half a ton of uranium dioxide. For example, the core of VVER-1000 contains 163 fuel assemblies, i.e., that only one reactor can contain 80 tons of radioactive fuel. There are 15 reactors in Ukraine. Fuel damage, as well as damage of the reactor containment will cause the release of radioactive substances into the environment, after which, depending on wind direction and other weather conditions, the territories will be contaminated,” Dmytro Gumenyuk.

And finally, it is necessary to remind that in the event of attacks on Ukrainian nuclear power plants, radiation contamination will spread not only across the territory of Ukraine, but also across Russia and throughout Europe through the air, soil, groundwater…

“We are doing everything to prevent this situation. I hope that in most cases our power units will survive even in case of single strikes. Our nuclear reactors are protected by the containment constructed of reinforced, durable concrete. The containment is designed to withstand various external and internal hazards, including earthquakes, tornadoes, light aircraft crashes,” Dmytro Gumenyuk

According to iNews and SOL

War in Ukraine: Current Threats to Radiation and Nuclear Safety of the Coun...