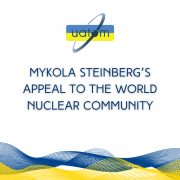 I, Mykola Steinberg, Chief Engineer of the Chornobyl Nuclear Power Plant from May 1986 to March 1987, know what a nuclear catastrophe is: my knowledge does not come from textbooks or from newspaper articles or from politicians’ statements. I know exactly what this is for children and adults, for relatives and friends, for those who are close to the epicenter and those who are thousands of kilometers away. I know how the peaceful atom kills friends. I know what forces and how many lives it takes to fight the peaceful atom that is out of control.

The tanks that shell nuclear power plants are the lowest of the low and once again reveal the immoral and barbaric attitude towards humanity as a whole and each human life individually.

The author of this crime is a rat raised within the walls of the Soviet KGB, thus celebrating another anniversary of the day when his ideal, his guru, the “great” Stalin died.

What else should this bastard do to make the world understand that global warming is not going to kill everyone? The world will be killed by this madman, surrounded by his accomplices who have long been tied to him by blood and by their highly spiritual fictional world, being ready and able to kill children on the territory of a foreign country and shell nuclear power plants.

He is unanimously supported by “peaceful” nuclear experts: none of the leaders in Russian nuclear power industry has condemned the criminal actions of his Fuhrer or has even expressed fear about the consequences of this egregious criminal act!
Sneaky cowards!

And where are you, the world’s nuclear experts? Have you hidden your heads under the wing like ostriches? You know better than anyone else that a nuclear tragedy can never be local!

The time for political correctness has been over. Do not you really understand to what the pacification games have led, especially Madame Merkel (by the way, where did the great German nuclear power go? Has it been replaced with Russian gas?) Where is her bright associate Macron?

Stop the beast before it is too late!

And now to my friends and colleagues, energy workers of Ukraine:

1. Energy workers do not give up. You are alone now, no one will help. Endurance and calmness. Professionalism. We will survive.

2. And they will choke and die. Their fate has been already determined. Tactical victories cannot save from strategic defeat.

Resolution of the IAEA Board of Governors
Scroll to top