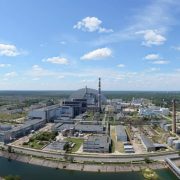 On 20 March a partial rotation of personnel took place at the Chornobyl nuclear power plant, which has been under Russian occupation since 24 February.

The evacuation of other persons who were at the occupied Chornobyl NPP was also carried out, including 9 military servicemen of the National Guards of Ukraine, 1 official of the State Emergency Service, 4 stalkers.

According to the Chornobyl NPP

What is the technical basis behind the seven IAEA pillars for Ukrainian NPPs,...
Scroll to top