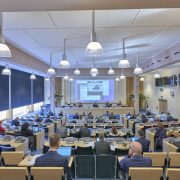 The meeting participants also decided to suspend scientific contacts with the Joint Institute for Nuclear Research (JINR), located in the russian city of Dubna, and suspend its observer status until further notice.

The CERN Council notes that the Organization’s core values ​​have always been based on cross-border scientific cooperation as a driving force for peace. That is why CERN member states express solidarity with the Ukrainian people and condemn кussian aggression, which is contrary to the values ​​of the Organization.

It should be noted that the first extraordinary meeting in response to the кussian invasion of Ukraine took place on 8 March 2022 at which it was decided to support initiatives to promote Ukrainian scientists and Ukrainian research activity in particle physics and suspend russia’s observer status at CERN.

According to the press service of CERN