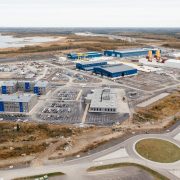 On 22 March 2022, at a meeting of the Finnish Parliament, Minister of Economy Mika Lintilä stated that after the full-scale russian invasion of Ukraine, the issuance of a license to construct a nuclear power plant by Fennovoima, co-owned by russian Rosatom, is not possible. Fennovoima also acknowledges that the russian-Ukrainian conflict could affect the Hanhikivi-1 project.

“At a time when a large company has an owner who has violated all the rules of international law relating to nuclear energy, who forcibly took over a foreign nuclear power plant, it is absolutely impossible to issue a permit for such a company”, said Mika Lintilä.

It needs to be pointed out that Fennovoima was founded in 2007 and is owned by two Finnish companies: Voimaosakeyhtiö SF with a 66% stake and RAOS Voima Oy (a subsidiary of “Rosatom Energo International”) with a 34% stake.

It is worth noting that the Hanhikivi-1 nuclear power plant is the largest investment project in Finland. In 2013, Fennovoima signed a contract with Rosatom’s subsidiary RAOS Voima Oy to purchase a turnkey nuclear power plant, which was responsible for the design, construction, installation, and commissioning of the plant. The license application to construct a nuclear power plant was submitted in the summer of 2015. At the end of 2021, the stage of developing a preliminary safety justification report for Hanhikivi-1 NPP was completed, after which the stage of development of detailed documentation should have started.