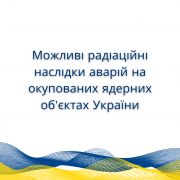 The information design studio Remarker jointly with the State Scientific and Technical Center for Nuclear and Radiation Safety developed an infographic, in which the impact of combat operations on the safety of Ukrainian nuclear power plants was analyzed.

The infographic provides answers to the following questions:

Is it possible to estimate at this stage the consequences of hypothetical accidents induced by damages to facilities by shells and missiles?

What can potentially occur under the destruction of the Exclusion Zone facilities?

What can potentially occur under the destruction of an operating NPP?

What is the danger of the situation when nuclear facilities are seized by occupiers?

Despite the fact that the Chornobyl nuclear power plant has already been liberated from russian troops, the extent of the damage received during the hostilities still remains unassessed. The Zaporizhzhya nuclear power plant is still occupied by the russian military, and operational personnel is working under pressure made by the occupiers.

According to the SSTC NRS Radiation Sources: Destroyed and Stolen by the Occupiers in Chornobyl
Scroll to top