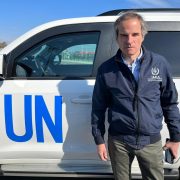 On 29 March 2022, the IAEA Director General Rafael Mariano Grossi arrived in Ukraine on a diplomatic visit aimed at talks on ensuring the nuclear safety and physical security of Ukraine’s nuclear facilities.

During his two-day visit, Rafael Mariano Grossi visited the South Ukrainian NPP, where he met with the Minister of Energy of Ukraine Herman Halushchenko, Acting Chairman of the SNRIU – Chief State Inspector for Nuclear and Radiation Safety of Ukraine Oleh Korikov, Acting President of NNEGC “Energoatom” Petro Kotin and Director of the South Ukrainian NPP Igor Polovych.

In particular, Oleh Korikov noted that today, in full-scale war conditions, the world has no experience in the safe operation of nuclear facilities, ensuring state regulation under hostilities and their restoring in the postwar period.

It should be noted that during the full-scale russian invasion of Ukraine, the Chornobyl and Zaporizhzhya NPPs were seized.

Despite the fact that russia is committing nuclear terrorism acts and violating all possible norms of international law, including the IAEA Charter, Rafael Mariano Grossi continues to communicate with Russian officials. Thus, after a diplomatic visit to Ukraine, the IAEA Director General traveled to Kaliningrad, where he met with the rosatom Head. As a result, the russian side announced agreements to continue working with the IAEA, while remaining out of politics. In turn, the IAEA does not comment on the statement in any way.

According to uatom.org Editorial Board

The Polish Nuclear Society Terminates Cooperation and any Contacts with Russian... 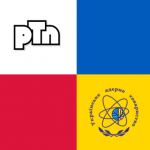 Possible Radiation Consequences of Accidents at the Occupied Radiation and Nuclear...
Scroll to top