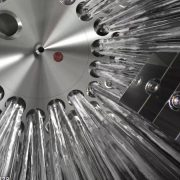 Projectile fusion is a new approach to inertial controlled thermonuclear fusion, based on a target technology consisting of bubble depressions around nuclear fuel pellets. The target is designed to create shock waves that occur when hit by coin-shaped projectiles flying at hypersonic speeds.

The projectile is released using a rail-like electromagnetic structure at a speed of about 23,400 km/h into a target containing nuclear fuel. When the projectile reaches the target, a pressure of about 100 gigapascals is created, with the help of interaction and bursts of depression, the pressure is increased to about one therapascal. This causes the fuel to accelerate to a speed of 252,000 km/h and become the fastest-moving object on Earth. The pressure and temperature generated by a nuclear fuel pellet during compression from a few millimeters to less than 100 microns are sufficient to initiate a fusion reaction.

Next, fuel pellet splashes down into a pool of liquid lithium, and a heat exchanger transfers the heat to water, generating steam that turns a turbine and produces electricity in the final commercial reactor design.

According to First Light, each target would produce enough energy to power an average UK home for two years. (about 6.2 MWh).

According to First Light

Trial Run of SNF Disposal Facility to Start in 2023

The UK has Revised its Energy Security Strategy
Scroll to top