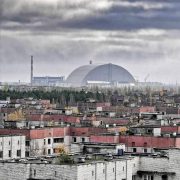 Due to the explosion at the Chornobyl NPP unit 4 on 26 April 1986, the most large-scale man-induced disaster in the world history of nuclear energy occurred. 36 years ago, the radioactive cloud, which spread not only through Ukraine, Belarus and Russia, but also in most European countries, including Sweden, Finland, Austria, Norway, Bulgaria, Switzerland, Greece, Slovenia, Italy and Moldova, was contaminated with radioactive cesium 137.

More than 600,000 persons took part in the elimination of the consequences of the catastrophe, and representatives of 25 countries of the world joined in solving the problems of radiation contamination in the world within the framework of the International Chornobyl Project. The UN Chornobyl Program became a continuation of the Chornobyl Revival and Development Program, established in 2002 to overcome the long-term consequences of the Chornobyl disaster and provide assistance to people affected by the Chornobyl accident. The main stage in the transformation of the destroyed unit 4 into an environmentally safe system was the construction of the New Safe Confinement started in 2010, owing to which, according to the Chornobyl NPP, the radiation level around the fourth unit was reduced tenfold. As we can see, 36 years have passed since the explosion at the fourth power unit of the Chornobyl nuclear power plant, but the struggle to ensure radiation safety around the world has been going on all this time.

The desire of Ukraine and the entire world to secure the humanity was neglected by the Russian occupiers, marauders, and ignoramuses. On 24 February 2022, all Chornobyl facilities were taken over by Russian militias and the ChNPP employees were taken hostage. For 36 days, the Russian military dug fortifications in the Red Forest, lived there, lit fires, slept, and inhaled radioactive dust. The exposure level they could receive exceeded the permissible limits by 50 times. Their activity, as well as the constant movement of tanks and heavy vehicles, could cause changes in the radiation background.

At a time when the entire world nuclear community is talking about a “safety culture”, a concept developed by the Advisory Committee on Nuclear Safety after the Chornobyl accident, the Russian occupiers are resorting to nuclear terrorism and creating new threats to the world’s nuclear safety.

To overcome the consequences of the Chornobyl disaster, funds from international and national financial institutions of other countries, such as the World Bank for Reconstruction and Development, the European Bank for Reconstruction and Development, the UK Government’s Know How Fund, as well as companies and organizations with experience and technology to support to Ukraine – National Report of Ukraine “20 Years of the Chornobyl Disaster. A Look into the Future”. In 1997, the Chornobyl Shelter Fund was established, with 45 countries with the general investments amount more than € 2.1 billion.

The world community not only facilitated overcoming the consequences of the Chornobyl disaster, but also recognized the Chornobyl industrial site as a platform for international research and enhanced scientific cooperation. A new stage of Ukraine’s international support for further cooperation at the Chornobyl site was the creation by the European Bank for Reconstruction and Development in 2020 of the International Cooperation Account for Chornobyl.

In the framework of international cooperation with the State Specialized Enterprise “Ecocenter” modernization and creation of automated radiation control systems, including a comprehensive radiation monitoring and early warning system; up-to-date equipment for determination of the full range of gamma-emitting radionuclides in the facilities subject to environmental monitoring of the Exclusion Zone was obtained and commissioned. In addition, a Central Analytical Laboratory was set up at the Ecocenter in 2015 in the CEZ through the EU Nuclear Safety Cooperation Instrument to determine the characteristics of radioactive waste.

During the full-scale Russian invasion of Ukraine and the seizure of the Chornobyl nuclear power plant by the Russian military, the occupiers not only looted the state and personal property of employees at the enterprises, but also destroyed buildings and laboratories. In particular, according to the State Agency for Exclusion Zone Management, the office and household premises were completely ruined and looted. The Central Analytical Laboratory, valued at 6 million euros, was looted and destroyed. The State Enterprise “Ecocenter” was robbed, and the Vector’s physical protection system was damaged. The offices and laboratory of the Institute for NPP Safety Problems were also looted and destroyed, where laboratory equipment and measuring devices were smashed, computers and office equipment were taken away. Garages with vehicles used to deliver scientists to research sites were also looted.

During their stay at the Chornobyl nuclear power plant and in the Exclusion Zone, the Russian occupiers-marauders destroyed all equipment and facilities designed to ensure nuclear and radiation safety not only in Ukraine but also in the world. However, the biggest loss for the world community was the data gained by scientists over decades of activities conducted in the CEZ.

The looted things, taken out of the Chornobyl NPP and the territory of the Exclusion Zone, has a high radiation background. According to the State Agency for Exclusion Zone Management, the first cases of taking out stolen things were recorded on 16 March which confirmed the presence of a vehicle from the Pivnichna Pushcha near Gomel in a column of racist vehicles.

Taking out of radiation sources and lack of physical protection of these items, their uncontrolled handling can lead to radioactive contamination of Belarus, Russia, and other countries to which they were delivered. If they were thrown out and left in the field, forest, or water, then radiation contamination can spread through the air, soil, and groundwater not only in Ukraine but also in Russia and throughout Europe.

Thirty-six years after the world’s greatest man-induced disaster, the explosion at the fourth Chornobyl NPP unit, the world has returned to nuclear hazards again. 36 years later, as a result of the Russian invasion, the issue of radiation contamination and contamination of territories has arisen again. 36 years later, the struggle for nuclear and radiation safety has become acute again.

The UK has Revised its Energy Security Strategy

Expert IAEA Mission at the ChNPP
Scroll to top