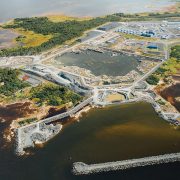 On 2 May 2022, Fennovoima announced the termination of its contract with rosatom’s subsidiary RAOS Voima Oy due to significant delays and the inability to implement the project in recent years. The full-scale Russian invasion of Ukraine and the tightening of sanctions against russia have increased the risks for the Hanhikivi-1 NPP project. Accordingly, any cooperation with rosatom is terminated, including design, licensing and direct activities on the Hanhikivi-1 site.

The Ministry of Employment and Economic Affairs of Finland is pleased that the management of Fennovoima has taken a clear position on the project, and called the decision to terminate the contract justified and consistent.

It is worth noting that the contract with the subsidiary of rosatom RAOS Voima Oy was signed in 2013, under which Fennovoima acquired a turnkey nuclear power plant. RAOS Voima Oy was responsible for the design, construction, mounting and commissioning of the NPP. In late March, due to a full-scale russian invasion of Ukraine, Finnish Economy Minister Mick Lintil refused to issue a license to construct a nuclear power plant.

According to the Fennovoima press service