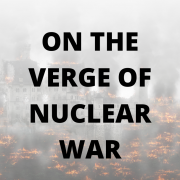 However, with the beginning of a full-scale Russian invasion of Ukraine, the occupiers sided with nuclear terrorism, seizing the Zaporizhzhya nuclear power plant, the Chornobyl nuclear power plant, and shelling a nuclear subcritical installation in Kharkiv. Already on the fourth day of the war against Ukraine, putin ordered to bring russia’s nuclear forces on high alert, and within a month the news spread about the threat of a nuclear strike on Poland. Since April, threats to use nuclear weapons have been heard almost weekly. For example, russian deputy security council chairman dmitry medvedev threatened Sweden and Finland in case of their joining NATO, and russian foreign minister sergei lavrov said the start of a nuclear war should not be underestimated.

Threats about the use of nuclear weapons are also heard on russian news channels. Thus, putin’s propagandists olga skabeeva and state duma deputy oleksiy zhuravlyov from the ldpr faction openly threatened a nuclear strike. During the broadcast on russia 1 TV channel, they demonstrated a picture with the caption “Approaching time of RS-28 “Sarmat” missiles to the capitals of the countries providing to Ukraine the most weapons”, according to which the time of Sarmat’s flight from Kaliningrad to Berlin is 106 seconds. To Paris – 200 seconds, to London – 202 seconds.

It is worth mentioning that the last century the world has already faced the nuclear bombing of civilians. Two attacks were carried out on Hiroshima and Nagasaki, making the world’s only use of nuclear weapons. The bombings killed tens of thousands of people, completely destroyed cities, and turned into a cemetery. All survivors were exposed to radiation and had radiation sickness. Cities have been rebuilt, but residents are still feeling the effects of the disaster…

The bombing of Hiroshima and Nagasaki, the accident at the U.S. nuclear power plant Three Mile Island, the Chornobyl disaster, and the accident at the Fukushima nuclear power plant forced to return to the issues of nuclear and radiation safety. Nuclear experts have always sought to protect humanity and ensure nuclear and radiation safety. However, now the actions and statements of russian citizens and their president vladimir putin are forcing to come back to the issue of nuclear hazard.