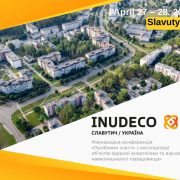 On 27-28 April, the INUDECO 2022 Seventh International Conference devoted to “Challenges of Ukraine’s Nuclear Energy in Wartime” was held. The Conference was opened by Mayor of Slavutych, Yuri Fomichev, and attended by 168 people from 20 countries.

Director of the Institute for NPP Safety Problems of the National Academy of Sciences of Ukraine, Anatoliy Nosovsky, and Head of the Chornobyl NPP Strategic Planning Department, Dmytro Stelmakh, talked about the consequences from occupation of the Chornobyl NPP by the russian troops. They noted that most of the research and laboratory equipment was ruined, metal safes were broken into and looted, system units, computer servers, and office equipment were stolen, and system boards were destroyed. According to Anatoliy Nosovsky, the occupiers were ordered to gather information on all research efforts since the computer equipment was brought to a separate room where memory cards were removed. Dmytro Stelmakh outlined short-term and long-term corrective measures, including the resumption of Chornobyl NPP decommissioning, Shelter transformation into an environmentally safe system, and transport of spent nuclear fuel to the dry storage facility.

Deputy Chairman of the State Agency of Ukraine on Exclusion Zone Management, Maksym Shevchuk, outlined the following priorities for ensuring the safety of the Chornobyl exclusion zone:

Reports that raised the issues of decommissioning, rehabilitation of the environment, and use of drones and robots in the new monitoring system of the Chornobyl nuclear power plant were presented at the Conference. In particular, Tatsuo Torii from the Fukushima University presented experience in radiation monitoring of the environment with unmanned vehicles and the introduction of new relevant techniques. In his speech, he compared the soil samples collected in the main areas of Japan and the samples taken from air using helicopters and drones. Tatsuo Torii noted that sky monitoring was an effective method to quickly determine the spread of contamination over a large area. Instead, Yannick Verbelen from the University of Bristol presented a radiation-resistant thermonuclear sensor for remote monitoring at the Chornobyl nuclear power plant. The Robopies sensor can monitor radiation levels and even detect individual isotopes at a distance.

Professor Tom Johnson from the University of Colorado presented educational proposals on the future of the Chornobyl exclusion zone. In particular, he noted the educational opportunities for researchers, including the development  of a database with measurement results, cooperation with university radiation programs, and continued training programs.

Following the INUDECO 2022 Conference, the participants adopted a resolution stating that individual international organizations did not introduce specific sanctions, such as the IAEA, Nuclear Energy Agency (OECD/NEA), World Association of Nuclear Operators (WANO), World Nuclear Association (WNA), and WENRA. The Conference participants also issued an open appeal to the international organizations to strongly condemn the actions of the nuclear terrorist country and to put pressure on its authorities to immediately stop acts of nuclear terrorism that pose a direct threat to the safety and security of nuclear facilities and prospects for the development of nuclear energy.

On the Verge of Nuclear War