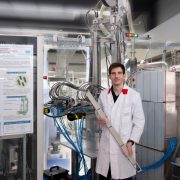 A study at the Heinz Maier-Leibnitz Research Neutron Source (FRM II) at the Technical University of Munich (TUM) has been conducted, which shows options to significantly reduce the radioactive waste produced during processing to a medical product

Nuclear medicine widely uses technetium-99m (Tc-99m) among other things for tumor diagnostics. Technetium is distributed throughout the body via the blood and accumulates in tumors, for example. When it decays there, the released radiation reveals the precise location of the tumor.

Technetium-99m is produced by irradiating uranium plates, so-called targets, with a high neutron flux that is practically only available at research reactors. Initially, starting from uranium-235 this produces molybdenum-99 (Mo-99), which decays to Tc-99m with a half-life of 66 hours. With a half-life of six hours, the latter converts to Tc-99, emitting gamma radiation that can be measured.

Currently, there are two standard processes in use, based on an acidic and an alkaline process, respectively. In the alkaline variant, the entire target is initially treated with caustic soda. In the process, Mo-99 is preferentially dissolved, while the uranium is insoluble in this solution and remains as a solid. The residual fission products are then separated from the aqueous solution in an elaborate chemical separation process.

Targets with low-enriched uranium are used at the Heinz Maier-Leibnitz Research Neutron Source (FRM II), which leads to the production of small amounts of molybdenum-99 during irradiation – about 0.1% Mo-99. Accordingly, in order to meet the global demand for Tc-99m, it is necessary to irradiate and process at least twice as much uranium plates, which will lead to more waste. Thus, the obtained liquid radioactive waste of average activity is about 15,000 liters of annual volume worldwide, which must be cemented to be suitable for final disposal. Finally, 375,000 liters of radioactive waste are generated each year.

Dr. Tobias Chemnitz, instrument scientist and his colleague Riane Stene developed a new method for extracting Mo-99 without the use of aqueous chemistry. They investigated that targets containing uranium and molybdenum react with nitrogen trifluoride in a plasma. These targets had the same molybdenum-99 content as the actual irradiated targets. They separated the excess uranium from the molybdenum by a light-controlled reaction. This method is no less efficient than treatment with sodium hydroxide, but does not generate liquid radioactive waste.

According to the Technical University of Munich

The U.S. Department of Defense Will Build a Mobile Microreactor and Hold a Demonstration...
Scroll to top