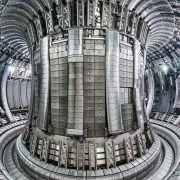 Scientists from the UK Atomic Energy Authority (UKAEA) have demonstrated for the first time how tungsten components are successfully scanned with X-rays, which helps detecting defects and accurately estimating their service life.

Tungsten is the strongest of natural metals, can withstand stressful conditions, which makes it a suitable material for lining the inside of a thermonuclear power machine, where the temperature is 10 times higher than in the core of the Sun. Despite the long-term characteristics of tungsten, withstanding intense neutron bombardment inside the vessel during fusion can jeopardize the reliability of the metal and lead to its wear.

So far, engineers and scientists have not had a proven way to detect potential structural damage, a conventional three-dimensional X-ray scan cannot penetrate inside due to the density of tungsten. However, scientists from the UK Atomic Energy Authority conducted an experimental study using a high-energy X-ray system and testing methodology.

According to the UK Atomic Energy Authority

The U.S. Department of Defense Will Build a Mobile Microreactor and Hold a Demonstration...