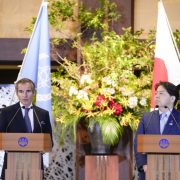 On 19 May, Foreign Minister Yoshimasa Hayashi announced that Japan will donate 2 million euros to the International Atomic Energy Agency (IAEA) for its efforts to support the safety of Ukrainian nuclear facilities attacked by russia. He made this statement at the meeting with IAEA Director General Rafael Grossi who was visiting the Fukushima NPP.

Foreign Minister Yoshimasa Hayashi informed that the funds would be used to send an IAEA expert mission and the necessary equipment to Ukrainian nuclear facilities.

It should be recalled that Rafael Grossi previously announced a visit of the IAEA expert mission to Chornobyl in the coming weeks.

According to Japan Today

UK Developing Robots to Assist with Decommissioning
Scroll to top