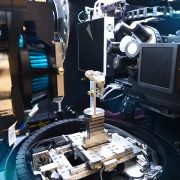 Researchers at the Idaho National Laboratory were the first to use an X-ray microscope to study the internal structure of uranium nuclei inside irradiated TRISO particles TRi-structural ISOtropic particle fuel (TRISO), consists of a kernel of uranium-based fuel surrounded by three layers of carbon- and ceramic-based materials chemically and structurally resistant to degradation in a reactor environment. The particles were irradiated for 560 days in INL’s Advanced Test Reactor.

The technique is also useful for examining fuel elements, where thousands of TRISO particles are embedded in a matrix material for insertion into a reactor. Just as important, the new imaging method can demonstrate whether that silicon carbide layer remains intact without having to destroy the sample. Further, the uranium kernel can develop pores that allow these fission products to move in unexpected ways that are revealed by the imaging technique.

This technological leap in nuclear fuel imaging can help researchers identify mechanisms for fuel degradation and collect data to create computer models of nuclear fuel. The data will help companies develop and evaluate fuel for their reactor designs.

According to the Idaho National Laboratory