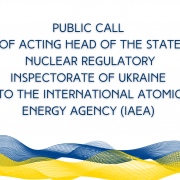 At night on March 4, 2022, the first in the world history forcible seizure of Zaporizhzhia NPP took place, as a result of shelling of which the armed forces of the russian federation killed three Ukrainian defenders and created unprecedented threats to the nuclear safety of the plant, which could lead to a catastrophe on a planetary scale.

After the seizure of Zaporizhzhia NPP, russian occupation forces – the military, along with representatives of the state russian companies Rosatom and Rosenergoatom – constantly terrorize and directly threaten the lives of the plant personnel and residents of the occupied city of Energodar.

The situation is aggravated by the constant missile attacks of the territory of Ukraine by rf, which, ignoring the possible risks and catastrophic consequences, directs them towards nuclear power plants. Cases of overflights of cruise missiles similar to the “Kalibr” were recorded over the South Ukraine NPP (04/16/2022), Khmelnytskyi NPP (04/25/2022) and Zaporizhzhia NPP (04/28/2022).

These acts of russia’s nuclear terrorism take place in the absence of a clear position and effective response from IAEA to Ukraine’s numerous appeals on this issue, which is why russian representatives are convinced of their impunity and take even more bold actions and statements. In particular, on May 1, 2022, referring to the “official position of IAEA and the statements of its representatives”, the so-called mayor of the occupied city of Energodar, appointed by the Russian military, stated that “the Agency did not record violations of the safe operation of ZNPP”.

Moreover, the management of IAEA not only encourages further escalation of ZNPP occupation, but also rebroadcasts the theses of the Kremlin propaganda. In particular, on May 25, 2022, in his speech to the audience of the Davos Economic Forum, IAEA Director General Rafael Mariano Grossi stated that allegedly “30,000 kg of plutonium and 40,000 kg of enriched uranium suitable for the manufacture of nuclear weapons” are stored at the russian-occupied Zaporizhzhia NPP. This is clear evidence that IAEA, represented by its Director General, is under the influence of russian propaganda and does not have reliable information.

The State Nuclear Regulatory Inspectorate of Ukraine categorically refutes the information about the alleged presence of plutonium and enriched uranium stocks at the Zaporizhzhia NPP captured by the russians, and in general in Ukraine, which are suitable for the manufacture of nuclear weapons. It is well known to IAEA, which annually confirms in its Safeguards Implementation Report the fulfillment by Ukraine of its obligations regarding the exclusive peaceful use of nuclear material which is under its control.

We remind the world community that, in pursuance of the 2010 Washington Nuclear Security Summit Communiqué, Ukraine voluntarily disposed of all highly enriched uranium on its territory, which was an outstanding event that largely led to an overall positive assessment of the implementation of the nuclear security summit mechanism.

Neither plutonium nor enriched uranium, which can be used for military purposes, has been and is not stored at Zaporizhzhia NPP. Moreover, it is technically and politically impossible for Ukraine to manufacture and store weapons-grade plutonium or uranium, even in quantities of a few grams, due to the lack of technology and a political ban on its production. It is very sad that the odious lies of russian propaganda are being broadcast at a high level by a top IAEA official. At Zaporizhzhia NPP, as well as at all operating NPPs of Ukraine, nuclear fuel is used in the form of fuel assemblies with an enrichment of up to 5%, which is not suitable for the manufacture of nuclear weapons.

The SNRIU would like to remind, that in accordance with the Resolution of the IAEA Board of Governors GOV/2022/17 dated March 3, 2022 “Implications of the situation in Ukraine for security, physical protection and safeguards”, the rf must immediately stop all actions directed against nuclear facilities in Ukraine and return control over all seized nuclear installations to the Ukrainian side. Also, in accordance with paragraph 4 of this Resolution, the Director General of IAEA and the Agency Secretariat were instructed to monitor the situation in Ukraine and report to the Board of Governors on relevant violations and threats to the safety of nuclear facilities in Ukraine.

We call on Mr. Grossi to assist Ukraine in our demands for the immediate withdrawal of russian troops, military equipment and Rosatom personnel from ZNPP site and the city of Energodar, which would be the best guarantee for the safe operation of Zaporizhzhia NPP, as well as to demand to stop shelling the territory of Ukraine with cruise and operational-tactical missiles, since such shelling could potentially lead to a planetary catastrophe, greater in its consequences than Chernobyl and Fukushima accidents altogether.

Acting Head of the State Nuclear Regulatory Inspectorate of Ukraine –

Chief State Inspector for Nuclear and Radiation Safety of Ukraine