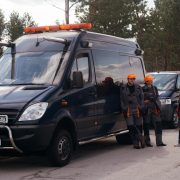 In June, experts of the State Enterprise «State Scientific and Technical Center for Nuclear and Radiation Safety», upon request of the State Nuclear Regulatory Inspectorate of Ukraine (SNRIU), are going to conduct a radiological survey of the Kyiv region territories that were temporarily occupied by the russian troops.

Since the russian military equipment invaded Ukraine from the Chornobyl exclusion zone, there are risks associated with the transport of radioactive contamination beyond its boundaries.

To attention of residents in Ivankiv territorial community!

If the aggressors’ occupying forces had been on your private territory in the Ivankiv territorial community and left their footprints, we propose you to make a request for radiological survey  by filling in the form at link or by calling our experts at (044) 422 55 43.

Anonymous requests will not be considered. Only demined areas are to be surveyed.

Radiological surveys are conducted upon received requests by the SSTC NRS and are free for community residents.

Ivano-Frankivsk Developed a Device for Monitoring and Notification on Chemical...