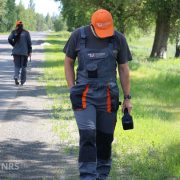 In view of numerous radiation survey requests received from local residents of Irpin, Bucha and Gostomel territorial communities, a decision was made to reschedule a visit of the SSTC NRS expert team. This is due to increase in the time needed to process the requests and arrange the route.

The radiation survey will start next week on 27 June. The requests for radiation survey of houses, apartments, residential buildings and adjacent areas where the russian troops placed their weaponry may be submitted by the end of 23 June.

We recall that anonymous requests and information posted in comments will not be considered. Only demined areas and buildings will be subject to radiation survey.

Radiation surveys are performed by SSTC NRS in compliance with received requests and are free of charge for community residents.

Radiation surveys are carried out within the SURVEY project intended to identify and reduce the risks of public exposure resulting from contact with radiation sources/radioactive contamination and reduce public concerns about the anticipated risks associated with the presence of invaders in the exclusion zone. The experience gained in the course of the project will be used in future in surveys of deoccupied industrial eastern regions.

The project is implemented in the framework of cooperation between the Norwegian Radiation and Nuclear Safety Authority (DSA) and SNRIU.