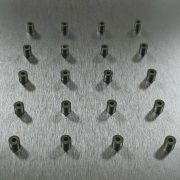 Clean Core Thorium Energy has announced its new strategic partnership agreement with the U.S. Department of Energy for the testing of Clean Core’s innovative fuel (ANEEL) for nuclear power plants. The testing will be carried out at the Idaho National Laboratory.

According to Clean Core Thorium Energy, the combination of thorium and uranium has real advantages since thorium is found more abundantly than uranium on the Earth.

The ANEEL fuel ensures greater performance decreasing the operating costs of existing reactors. The ANEEL fuel reduces the radioactive waste generation by 87.5% due to the high fuel burnup rate.

The Idaho National Laboratory expects to begin testing of the ANEEL fuel in their Advanced Test Reactor by the end of 2022 or early 2023.

It is expected that ANEEL fuel assemblies would produce carbon-free power in commercial CANDU reactors by the end of 2025.

According to Clean Core Thorium Energy

To Attention of Residents in Gostomel, Bucha and Irpin Territorial Communit...