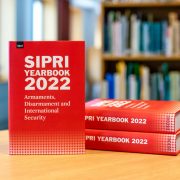 On 13 June, the Stockholm International Peace Research Institute (SIPRI) published the findings of SIPRI Yearbook 2022 assessing the current state of armaments, disarmament and international security. A key finding is that despite a marginal decrease in the number of nuclear warheads in 2021, nuclear arsenals are expected to grow over the coming decade.

According to the Stockholm International Peace Research Institute, the total number of deployed warheads currently makes 3732. The total number of warheads intended for use by the armed force is 9440 and 5708 warheads are in military stockpiles.

Russia and USA reduced their warhead inventories in 2021 in connection with the dismantling of warheads that had been retired from military service several years ago. Nevertheless, the number of warheads in the two countries’ useable military stockpiles remained relatively stable. Deployed strategic nuclear forces of both countries were within the limits set by a bilateral nuclear arms reduction treaty (2010 Treaty on Measures for the Further Reduction and Limitation of Strategic Offensive Arms, New START). However, New START does not limit total non-strategic nuclear warhead inventories.

Nearly 90% of nuclear weapons belong to Russia or the USA. Other nuclear-armed states such as the United Kingdom, France, China, India, Pakistan and the Democratic People’s Republic of Korea (North Korea) continue to modernize or deploy their nuclear arsenals or are going to do that. Although Israel does not confirm the presence of nuclear weapons, researchers believe that this country is also engaged in modernization of its nuclear arsenal.

In 2021 France officially launched a program to develop a third-generation nuclear-powered ballistic missile submarine (SSBN) and the United Kingdom announced its decision to increase the ceiling on its total warhead stockpile in a reversal of decades of gradual disarmament policies. While criticizing China and Russia for lack of nuclear transparency, the UK also announced that it would no longer publicly disclose figures for the country’s operational nuclear weapon stockpile, deployed warheads or deployed missiles.

China substantially expanded its nuclear weapon arsenal, which satellite images indicate includes the construction of over 300 new missile silos. India and Pakistan appear to be expanding their nuclear arsenals, and both countries introduced and continued to develop new types of nuclear delivery systems.

North Korea continues to prioritize its military nuclear program as a central element of its national security strategy. While North Korea conducted no nuclear test explosions or long-range ballistic missile tests during 2021, SIPRI estimates that the country has now assembled up to 20 warheads, and possesses enough fissile material for a total of 45–55 warheads.

Wilfred Van, the Director of the Weapons of Mass Destruction (WMD) of the Stockholm International Peace Research Institute, said that it is very disturbing pattern since all nuclear-armed states are now expanding or upgrading their arsenals and most of them are switching to more aggressive rhetoric about nuclear weapons and its role in their military strategy. The Treaty on the Prohibition of Nuclear Weapons entered into force in January 2022, New START between Russia and the United States was extended for five years and negotiations concerning the possible return of the US to the Joint Comprehensive Plan of Action (JCPOA) were renewed under condition of JCPOA fulfillment by Iran. Despite this, the Permanent members of the United Nations Security Council (P5) which have nuclear weapons continue to expand and modernize their nuclear arsenals and even increase the share of nuclear weapons in military strategies. In view of the all-out invasion of Russian Federation to Ukraine, Russia threatens to use nuclear weapons on the territory of Ukraine, Poland, as well as on the territory of the countries providing the strong military assistance to Ukraine – the United Kingdom, Germany, France, Sweden, Finland.

According to the Stockholm International Peace Research Institute