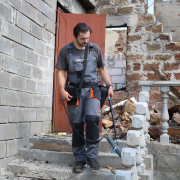 Within cooperation between the Norwegian Radiation and Nuclear Safety Authority (DSA) and State Nuclear Regulatory Inspectorate of Ukraine, SSTC NRS experts continue radiation survey of the deoccupied territories of the Kyiv region.

In the period from 27 June to 7 July, SSTC NRS experts, as a part of the team of the RanidSONNI mobile radiation survey laboratory, made a number of trips to Bucha and Irpin, villages Hostomel, Ozera and Blystavytsa. During this period, the following was surveyed in total:

The route of the radiation survey took into account the information received from local residents on the places where radioactive contamination can be found.

We are glad to inform that according to the survey results, no radioactive contamination of objects, premises and sites was found, which could be associated with the activities of occupiers. In the surveyed areas, no increase in dose rate was recorded; the recorded values were up to 0.2 µSv/h, which corresponds to the natural background characteristic of this territory.

During the survey of an apartment according to one of the applications, experts found a watch with luminous mass containing radium-226. The dose rate from it was 10 μSv/h, which is several tens of times higher than the health and safety standards for residential premises. The owner of the watch was advised to immediately transfer it to a specialized enterprise for storage by calling the police or the State Emergency Service of Ukraine.

We remind that the voluntary surrender of radiation sources by citizens does not entail criminal liability and is free of charge for individuals.

The radiation survey is a part of the SURVEY project intended to identify and reduce the risks of public exposure as a result of contact with radiation sources/radioactive contamination, as well as to reduce public concerns about the anticipated risks associated with the presence of invaders in the exclusion zone. The experience gained in the course of the project will be used in future during surveys of deoccupied industrial eastern regions.

To Attention of Residents in Ivankiv Territorial Communities!
Scroll to top