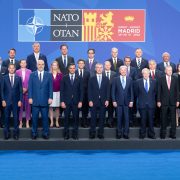 On 29 June 2022, Heads of NATO states and governments approved the new Strategic Concept, defining the three main NATO tasks: deterrence and defense; crisis prevention and resolution; and security through cooperation.

The Strategic Concept is one of NATO’s main documents, which outlines the goals and values ​​of the Alliance, provides a collective assessment of security problems, and defines the organization’s future political and military development. NATO Heads of states and governments regularly review and update the Strategic Concept. After the end of the Cold War, the document was updated every 10 years. The previous Strategic Concept was adopted at the NATO Summit in Lisbon in 2010.