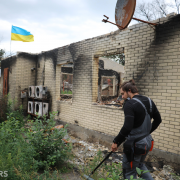 The project was implemented by the SSTC NRS experts in the framework of cooperation between the Norwegian Radiation and Nuclear Safety Authority (DSA) and State Nuclear Regulatory Inspectorate of Ukraine (SSTC NRS).

The survey was carried out with the aim of detecting radioactively contaminated facilities, calibration sources and other radioactive materials that could be taken out of the Chornobyl Exclusion Zone (CEZ) territory by the russian army soldiers during the occupation, as well as to detect radioactive contamination that could have been transferred by the occupiers beyond the CEZ borders as a result of violation of the radiation safety regime.

During the survey missions on 12 and 14 July, SSTC NRS experts, as part of the crew of the RanidSONNI mobile radiological laboratory, surveyed the Bucha town territory (northern part of the city), Vorzel, the village of Gostomel (residential quarter Pokrovskyi) and the villages of Ozera and Moschun, as well as the Ivankivsk local community (the village of Ivankov, Babyntsi, the villages of Rudnya-Shpilivska, Shpyli, Bilyy Bereg, Rozvazhniv, Stanyshivka, Sukachi).

The route of the radiation survey took into account the information received from local residents on the places where radioactive contamination could be detected.

Based on the survey results, no radioactive contamination of facilities, premises and areas, which could be associated with the activities of the occupiers was detected. No increase in the ambient equivalent dose of gamma radiation (exposure dose rate) was recorded in the surveyed territories. EDR values ​​obtained during gamma monitoring using the mobile laboratory equipment and portable equipment were up to 0.22 μSv/h, which corresponds to the natural background values ​​typical for the area.

In total, during the measurements conducted during the first phase of the project, the following facilities/objects were surveyed:

The radiation survey activities are carried out within the SURVEY project, which aims to identify and reduce the risks of the public exposure due to contact with radiation sources/radioactive contamination, as well as to reduce the public concern due to perceived risks associated with the presence of occupiers in the Exclusion Zone. The experience gained during the project will be used in the future when surveying the de-occupied industrial eastern regions.

Under the IAEA Response and Assistance Network (RANET) mechanism, assistance...

The USA is Investing in the Development of the Staff Potential for the Ukrainian...
Scroll to top